Enter using the Rafflecopter form below to win a beautiful necklace created by Baubles, Beads, and Stuff and your choice of any one of Rachelle’s three books (the series begins in Book One, of course, but in case you have one or two of her books already, Rachelle will gladly send you the next one to read!).

International friends, the paperback & necklace giveaway is open to continental U.S. addresses only (sorry!). But do still enter, because one international winner will also be chosen to receive an e-book. 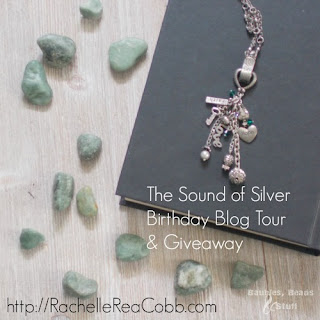 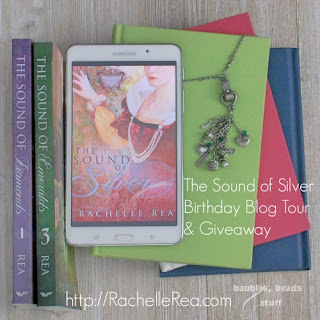 Rachelle is also the author of The Sound of Diamonds, the first book in the series, and a newlywed! This summer, she married a man with the same first name as the hero of the series! I’m joining in this blog tour to tell you a little more about Silver and spread the news about the rocking giveaway Rachelle is hosting—make sure you enter using the Rafflecopter form to win the lovely necklace pictured and your choice of any of the Steadfast Love titles!

ABOUT The Steadfast Love SERIES

In 16th-century Europe, the Reformation rages between Protestants and Catholics. Gwyneth, half-Dutch, flees from England to Holland to escape the man who murdered her parents. When he follows her there and insists he came to rescue her, will she trust this man called Dirk? When tragedy strikes, will their steadfast love erode?

Times gone by snatch Rachelle Rea Cobb close, so she reads and writes about years long ago--her passions include the Reformation, Revolutions, and romance. Rachelle wrote the Steadfast Love series during college. Five months after she graduated, she signed a three-book deal with her dream publisher, WhiteFire. She's a homeschool grad, Oreo addict, and plots her novels while driving around her dream car, a pick-up truck. In June 2016, she married a man with the same name as her fictional hero, and they live happily ever after in Small Town, South.

ABOUT The Sound of Silver

The stalwart saint and the redeemed rebel. One fights for faith, the other for honor…

After Dirk rescues Gwyneth from the Iconoclastic Fury, she discovers that faith is sometimes fragile—and hope is not as easy as it may seem. Gwyneth continues her quest to learn more about the love of God preached by Protestants she once distrusted.

Meanwhile, Dirk’s quest is to prevent his sullied name from staining hers. Will his choice to protect her prove the undoing of her first faltering steps toward a Father God? Once separated, will Dirk and Gwyneth’s searching hearts ever sing the same song?

>> And if you want to learn more ABOUT BOOK ONE, The Sound of Diamonds

Her only chance of getting home is trusting the man she hates.

With the protestant Elizabeth on the throne of England and her family in shambles, Catholic maiden Gwyneth seeks refuge in the Low Countries of Holland, hoping to soothe her aching soul. But when the Iconoclastic Fury descends and bloodshed overtakes her haven, she has no choice but to trust the rogue who arrives, promising to see her safely home to her uncle's castle. She doesn't dare to trust him...and yet doesn't dare to refuse her one chance to preserve her own life and those of the nuns she rescues from the burning convent.

Dirk Godfrey is determined to restore his honor at whatever cost. Running from a tortured past, Dirk knows he has only one chance at redemption, and it lies with the lovely Gwyneth, who hates him for the crimes she thinks he committed. He must see her to safety, prove to the world that he is innocent, prove that her poor eyesight is not the only thing that has blinded her, but what is he to do when those goals clash?

The home Gwyneth knew is not what she once thought. When a dark secret and a twisted plot for power collide in a castle masquerading as a haven, the saint and the sinner must either dare to hold to hope...or be overcome.

1. When and where did you first get the idea for the Steadfast Love Series?

A song I was listening to on the radio inspired the title of the first book. So I wrote Diamonds, but when I finished it, I realized to my great frustration that the characters weren’t done with their story, even though I had been quite adamant that I would write a stand-alone novel. But the story wasn’t finished, so I kept writing.

2.  Readers often pick out favorite quotes from a novel. Do you have a favorite of your own from The Sound of Silver?

Yes! In fact, my friend Mindy, a calligrapher, even created a beautiful piece of art from one of my favorite quotes: “Within the pages of books one’s heart can be revealed.”

3.  Can you tell us what first drew you to writing Inspirational Historical Romance?

My first exposure to the genre came when I read Heartsong Presents novels when I was twelve. Those small books introduced me to how much I believe in the power of story, especially love stories set in times gone by.

4.  I saw on your website that you also write reviews, articles and offer editing services. What's one of your favorite things beyond writing novels that you enjoy?

Editing is such fun! I daresay I enjoy editing a page full of my own (or others’!) words just as much as I enjoy splashing words onto a blank page.